Now this place is pretty enchanting. I’ve spent about 30 minutes going up and save for a brief glimpse of the curly brown back of someone’s head I’ve been entirely on my own. The sun is out in all it’s gloriousness but thankfully the path is shaded by towering rocks on all sides. That’s not to say this mini mountain isn’t green, indeed it’s as lush as the rest of the Mexican basin. There are several different views from the top.

Take a Look Around…

To the west overlooks the huge man made Lake Avándaro, created with the building of a series of dams for the hydro electric plant called Ixtapantongo. The multi layers of mountain look amazing across the distant water’s surface, this is one high place which might suit Roni as looking down all you see (aside from the vertical cliff face teeming with life which even Attenborough would whip out a camera for) is a miss-match of green and blue perfect gardens of the rich.

To the North and South are forested mountains as far as the eye can see, with splotches of field or hamlets gleaming white in the afternoon sun. 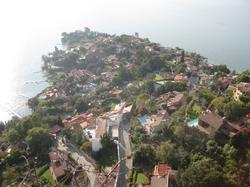 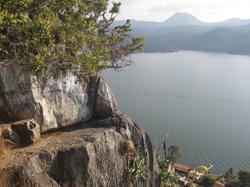 …and Settle in the East

The East, however, is my favourite. Right below me is a wild looking river mouth with half a dozen dingies loosely moored. As the river snakes inland it quickly becomes lost in the urban sprawl which is Valle de Bravo (Valley of the Brave). I can see a church squatting in the middle of a small cemetery, new buildings, old buildings, isolated clusters of houses, bright walls and football pitches all strung together by telephone cables. 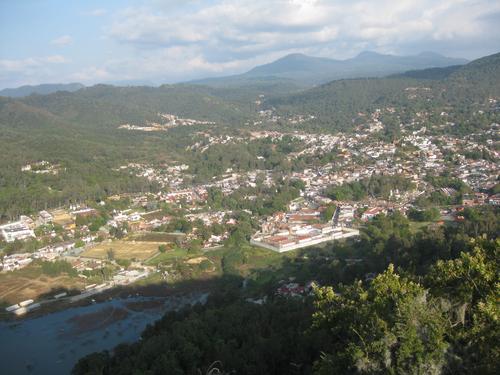 And the sounds are even more of a sensory explosion, nothing dominates for more than a second above the tinkering of people selling, children playing, someone is singing, roosters… there are roosters everywhere! Dogs are barking, people calling, busses struggling up the hills with their 20 year old engines and motorbikes cruising around. Birds chirping, musicians playing, roadworks and builders hammers, a lorry stopping quickly, a car honking, a pig squealing.

So Enchanted Was I, I Forgot to Tell You Where I Am…

I’m leaned against a tall black cross with a virgin Mary on my left, a 20 foot drop on my right and some kind of tree which appears both fluffy and dead at the same time. It’s nice, certainly a place to make me happy.

Today was a bit of a last minute plan, one of those which presents itself as the obvious when the original one falls through. Derro was unable to take me to the volcano because he had to study, so to Valle de Bravo I came. After half a dozen hopeful CouchSurfing emails I had a call from a guy called Sebastian, who could host me – but then he couldn’t but his friend Pat could. But then Pat couldn’t so Sebastian put me in touch with Rodrico – who I’ll be meeting in a little over an hour.

A night of coffee, colonialism and [[cerveza]] awaits!