I joined WorkAway.info because it was much cheaper than WWOOF (30GBP for 2 years worldwide membership, compared to 20GBP for one year just in Mexico). It has far fewer opportunities in Mexico (18 vs. 80) and they’re not what I thought my ideal placement would be (Bar work, Administration vs. Organic Farming and Permaculture). However I am very glad that I did!

I’ve just spent 10 days living with Shayla, a most fantastic person who has WorkAwayers to help her with day to day things such as walking the dog and helping her to drink fantastic smoothies and enormous salads. Shayla had some medical problems (Doctors included) 4 years ago which left her with some damaged brain tissue meaning she now has no balance, unable to continue her awesome career at Apple she moved to Mexico to heal. She’s hosted volunteering travellers for just over a year since her partner died.

You’d imagine someone with bad luck such as that could easily fall into a depressing cycle of bad Hollywood movies and microwaved ready meals. Shayla, on the other hand is living in the today, enjoying a healthy life of endlessly wonderful and (usually) incredibly healthy food (During my one short week we enjoyed Portabella Burgers, Mushroom Masala, Chocolate Chip Cookies, fresh brown Rice milk). 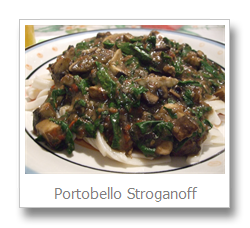 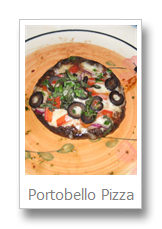 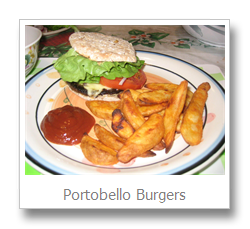 We may have gone a little nuts for Portobello mushrooms on occasion.

In between meals life was simple and good and involved walking to market with Choco – the lovable pup who’s not sure if he’s a cat or a rabbit – and relaxing in the sun. Shayla and I shared a fantastic bond and a sometimes spooky ability to have the same thoughts. We both love our kitchen knives and spinach smoothies (though Shayla definitely wins in the Smoothie Lover contest) and as a tech savvy person we can appreciate hanging out together whilst also using computers. Some people find that unsociable, uncomfortable or rude but we just got on with it 🙂 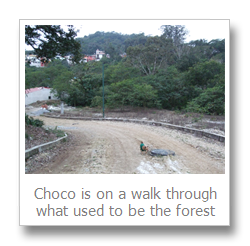 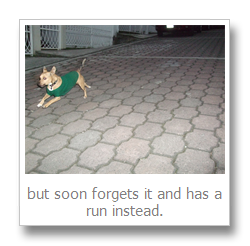 (Not) Off to the Falls

On my penultimate day in Coatepec Shayla’s next WorkAwayer arrived, Mai. This meant I could use the Monday to visit the Waterfall! There are few falls around Coatepec, one of which is a short walk from Shayla’s part of town. While experimenting with coffee in Mexico’s “Capital of Coffee” I had got chatting to the waiter who had then invited me on a cycling trip to the falls with him and some of his friends – he could even lend me a bike. Awesome! So I arranged the morning off with Shayla and awaited his email that night. Nothing came. A few days later I popped into the same coffee shop and saw the guy again, he said they had cancelled due to the weather but Monday was going to be nice and they’ll certainly be making a trip! No worries, I’ve met enough Mexicans to know they’re not the worlds most reliable people.

Monday night, still no word. So I took matters into my own hands, shot off half a dozen emails on the ever trusty [[CouchSurfing]]. Last minute, I know, but perhaps…. 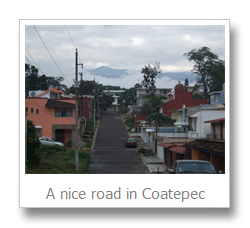 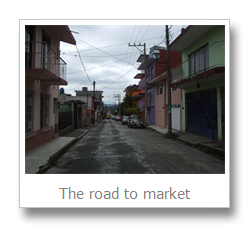 Off to the Falls

Waking up Monday morning I checked my emails and sure enough, I had a message from Juan. Of course all Mexicans are called Juan but use other names and this one went by Carlos. He was up for a trip to the falls and would meet me at 11am at a corner I suggested. I was a little late arriving at the corner, but again Mexicans are notoriously late for everything so I wasn’t too concerned. At 11:20 I headed off on my own.

At 11:40 I had a call from Carlos. I had managed to find the only punctual Mexican in the whole of Mexico, he had arrived promptly at 11, but having left my phone number at home he had left at 11:10 to get it – I arrived at 11:15. We spoke a little and kind of decided that since I was already at the falls and wanted to get back home by 12:30 it wasn’t really practical to meet. Then the signal disappeared and we were cut off.

That aint a waterfall!

The walk to the falls was uncertain and filled with doubt. After 10 minutes I heard the tell tale sound of falling water, that was quicker than I expected. Walking closer I saw a pitiful excuse for  waterfall, actually only  dam built to power (I presume) a water wheel. I kept my faith, I’d heard a lot about these falls. I asked for directions, and was sure enough directed further up the road. I came to a bridge, with a much more open landscape including another man made “waterfall” and had another “Hmmm I’m not convinced” moment. 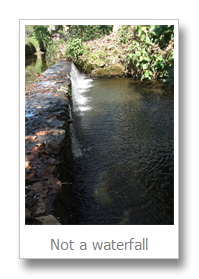 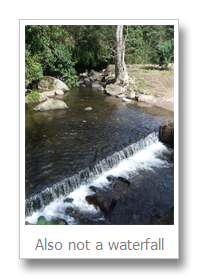 On I persevered, walking through a plantation of some kind of bean along a narrow concrete path (which turned out to be a covered irrigation channel) until lo and behold I encountered the mighty falls! Well “Mighty” might be a bit much, but given my expectations by this point I was excited. An open plain next to the river with yet another man made falls no doubt plays host to picnics and kids with grazed knees in the summer, and peeking up river I could see an actual real waterfall with spray and everything. Pondering how to get closer I  noticed a vague but definite path up some rocks to my right. I was a little worried that Choco wouldn’t be able to get up, but the leaper and bounder in him relished the challenge and he was soon ahead of me running around the plantation above.

I have a fairly strict rule to follow paths so as to not be too much of a disturbance and this path was testing the limits of this! After not too long we were walking through another plantation and found a more solid path leading back down towards the river. Finally, a real waterfall! Not the biggest, not the best, but an almighty splashing off a huge rock! 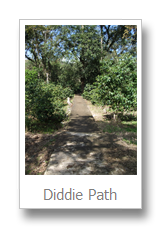 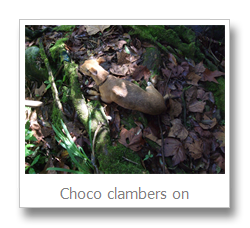 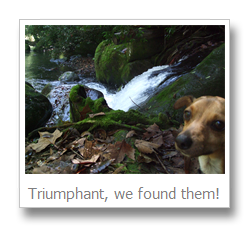 I sat for a few minutes, writing this very blog, as Choco explored, sniffed and jumped off rocks. All too soon he was ready to go and pee on something else so we headed back. This time he went absolutely bonkers running around the still unidentified trees. Halfway back to where we stated I saw another path, this one clearly defined and well trodden heading to the taller natural falls I saw earlier.

This path down didn’t looks quite so secure with slimy rocks to the sides and large steps. I thought for a minute, checked with Choco who gave me a nod and set off down. It wasn’t a long path by any means, but the going was slow. Half way down I hear a yelp and spin around just in time to see Choco disappearing down the side of the rock. “Oh dear” doesn’t quite cover my thoughts but a split second later there was a splash. I hopped off the rock after him just in time to see him clamber out the water onto a ledge on the side. Neither here not there, the loyal little scallywag tried to come back to me, no use that I think the second falls will have to remain elusive. I jumped in after him (that may sound daring, but it was only 10 inches of motionless crystal clear water) and scooped him up onto the picnic-perfect plain from where we started. Choco had a shake, and I dried him off with a towel. He had another shake, then a third. The poor guy was a bit wet, but luckily the sun had come out and he dried off soon enough. 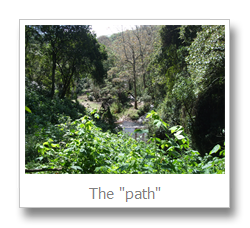 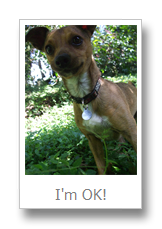 Arriving just in time to think Choco and I are still cool mountain climbers, I look up to see Carlos walking towards me! He’d managed to get here in time after all! We sat chatting by the river for a few moments before heading back to Shayla’s where he was promptly invited to stay for dinner (his first Indian food!) and general chilling out.

It was a day of frustration, excitement, anxiety, sun, uncertainty and good company. A good, good day 🙂

What did you say those trees were?

Those trees, turned out to be coffee trees. Yes, my beautiful baby beans hanging out on their tree waiting to be stripped, baked, beaten and drowned to provide me with the liquid black magic that make the world spin so beautifully. Thanks to Carlos for the identification! 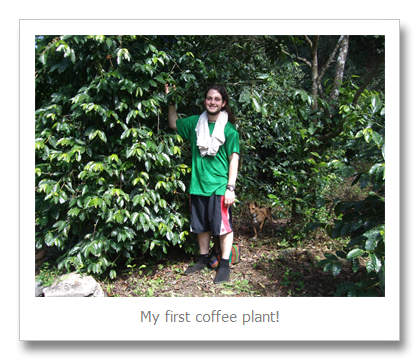