I’m currently travelling at 578mph 10,000m above Greenland through -66C air. Not too shabby for a first blog post eh?

Aparently the flight will be 90 minutes shorter than expected*, thanks presumably to favourable winds. We’ve just eaten, my vegan meal was pretty awesome aside from the milk based creamer they gave me. I had mushroom couscous, nice bread, salad and a rice pudding0esque dessert. At 587mph, that’s my kind of fast food!

I’m sat next to a tennis player and a French lady – with whom I can communicate only enough to pass a pen back and forward as we both struggle to translate the Mexican Border Control forms. Hurrah for my Kindle! Though where’s Saz when you have an actual need for some French? 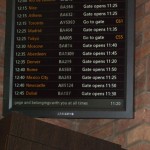 There in plenty of time! 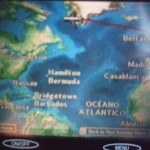 * as it turned out, it was only 10 minutes shorter.